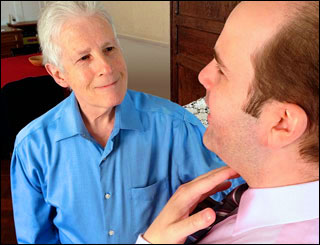 Professor Lauer sings “Comfort Ye and Every Valley,” from The Messiah by George Frideric Handel.

Darrell Lauer, a specialist in voice building and vocal rehabilitation, has been teaching, singing, and doing vocal therapy for the past forty-one years. His students have performed in a variety of venues, including regional United States, European, and Scandinavian opera houses, major New York City recital halls and with major orchestras worldwide.

His prominent students perform on rock and rap concert tours throughout the world.

Darrell Lauer is currently giving voice instruction at The Belz School of Jewish Music at Yeshiva University where he has been since 1996. He has also taught singing at Hofstra University for twenty-three years where he gave classes in vocal pedagogy, and vocal repertoire and diction. In addition he taught at Concordia College (nine years) and Nassau Community College (one year guest appointment).

He has been a guest instructor at voice seminars in America, Sweden, and Denmark. Mr. Lauer has also given master classes in American song at The Norwegian State Academy of Music, and The North Carolina School of the Arts. He has also been an instructor in music at Fordham University and
ST. Nersess’s Armenian Seminary.

Mr. Lauer has had clinical training and experience in vocal therapy with one of the leading voice therapists in America – Oren Brown. For over fifteen years he collaborated with Mr. Brown treating a variety of voice disorders. In his six month internship at Manhattan Eye, Ear, and Throat Hospital he provided diagnostic and therapeutic services to adults, including post-surgical laryngeal rehabilitation and voice restoration as well as neurological and common voice disorders.