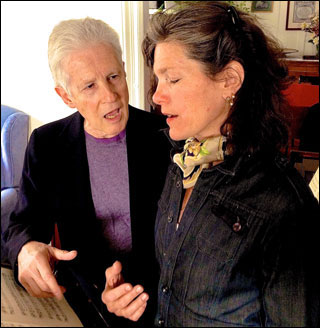 “I began taking lessons with Darrell after seeing about 5 different teachers in about 5 years. With my rigorous touring and promo schedule my quest and thirst for knowledge of my instrument became very much a priority for me. We spent several months working together almost daily.” “Through our work I began to comprehend the concept of blending the high and low voice together, supporting the voice with the body and breath. He was able to really help me with keeping the voice thin, crisp, healthy, and young sounding. It is hard for me to describe his methods but I would fully recommend him to anyone serious about singing or voice. Mostly he really helped me gain the tools to not have to be dependent on another but to look after the voice myself through a daily regimen and vocal warm-ups.”

“I came to Mr. Lauer because I was concerned about turning 65 and maintaining my voice as I get older. The result has been that my voice is stronger and more dependable than in previous years, and my production is easier and smoother, as well. This is all thanks to Mr. Lauer, who made it all possible!”

Dean and Director of the Beltz School of Jewish Music

“I am writing to you on behalf of Darrell Lauer, whom I have known for 15 years in his capacity as vocal instructor at the Philip and Sarah Beltz School of Jewish Music, Yeshiva University.

In my capacity as Director of the Beltz School, I have had the opportunity to both observe Mr. Lauer in the classroom and to know him on a more personal level. His knowledge of the voice, from the anatomy, breathing technique, and sound production is thorough; his musicianship is of the highest caliber. As a pedagogue, he clearly and methodically presents the subject matter and conducts himself with the utmost professionalism towards the students. I have no doubt that his comprehensive approach to voice is shaped by his training as a certified speech language pathologist.

There have in fact been a few students who have begun their training barely able to speak above a raspy whisper (resulting from prolonged misuse of their instrument) and emerging a few semesters later with a repaired voice, able to speak and sing clearly and pleasantly.

Mr. Lauer has been invited many times to present master classes in vocal production and management at the annual conventions of the Cantorial Council of America, where his sessions are always eagerly anticipated by those in attendance for not only the content but also the manner of presentation.

Personally speaking, Darrell Lauer is one of the most sincere, sensitive and honest people I have known. His character is exemplary and he is admired and respected in every way by our faculty and staff.

Beltz School of Jewish Music is very fortunate to have Darrell Lauer as a faculty member, as would any organization with which he chooses to affiliate himself.”

“Mr. Darrell Lauer is a certified speech therapist and also a voice teacher. For a period of time both of my parents became ill at the same time and I talked a great deal under a lot of stress. I returned to New York City after their deaths and tried to sing again, only to find that I had developed vocal nodules on my vocal folds. Darrell immediately began with speech therapy and within 6 to 9 months, I was making vocal sounds and singing a little, increasing the singing exercises. Now I am singing and exercise my voice regularly. I later sang for 2 choruses, one professionally and my church choir. I shall continue to sing and praise Mr. Lauer for his concern and caring!”

“I have studied with many teachers over the past 15 years, yet with Darrell Lauer I feel I am finally learning to sing. Mr. Lauer thoroughly understands how great singing is made, and is able to communicate very clearly about how one produces it. His expertise as a pedagogue, his calm demeanor, and his warm personality all serve to make every lesson a pleasure. I have never left a session with him feeling I have not accomplished something and come closer to my goals. With Mr. Lauer’s encouragement, I have been able to explore new ways of using my voice. I am building the solid technique that I need to compete in the professional opera world. Working with Mr. Lauer has restored my confidence in my own potential,and renewed my love of singing.”

“The technique I learned from Darrell Lauer helped me be at ease during performance. With less to worry about, it’s easier to complete my vocal task. I would have to say that “free-ness” brought about by superior vocal production is the main benefit of studying with him. You can produce the vocal sound with pressure and strength, but those alone will not keep you in shape and able to perform for years. In his teaching studio, Maestro Lauer really focuses on the longevity and health of the voice.”